EVICTED expat families were left watching helplessly yesterday as their homes were taken to pieces, following the unhappy conclusion of a two-and-a-half-year legal battle.

The wooden lodges in Atlantic Forest Park, in Zahara de los Atunes, have now been removed, leaving the foundations sitting empty across the park.

Despite the scenes of destruction, the families are celebrating a small victory, after managing to sell their homes on for scrap wood – although for a fraction of the real value.

“We beat the landowner’s intent to cash in on our misfortune and sell our homes on for his profit,” said lodge owner Tony Pearson, 58, from Kent in the UK.

“He also has a sizeable fine to pay to the Andalucian Junta, which serves him right.”

Landowner, Paco Verduga Durante, now faces a considerable task and expense in returning the land to its former condition as a finca.

“It was painful when my former neighbour presented me with the name plaque from my house, which is all we have left from out holiday home investment,” said publican Mr Pearson.

“But we have all gained satisfaction in ensuring that no one profitted in any way from our loss. So in one way, you can strike up a victory for us!”

The group are now suing Alex Joll, the owner of the company that leased them the land in 2008, for fraud.

The project envisaged the creation of a mobile home park with space for 84 mobile homes and 15 lodges built.

However, a combination of planning problems emerged, which led to the project being ruled as illegal.

A friend of Mr Joll said he had failed to get the correct permission from Barbate town hall and had been unable to buy the land off the original owner.

“He was unable to turn things around despite selling the project to a venture capital group in 2010,” said the source.

“By 2011 the venture capital company stopped funding the project and the park ‘collapsed’.

“An attempt to buy the land from the owner in 2012 failed when he refused to sell.”

However he added: “Once they are out the owner can start the process again and seek a new permit to build homes.” 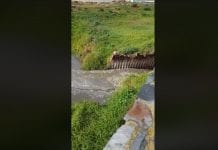