NERJA, 1979: Two Canadians in their late 20s order another round of San Miguels in the atmospheric Cave Bar, in El Capistrano village.

They wave away the barman’s muttered reminder that they’ve already racked up a hefty bar tab and continue to draft a long, long list of quiz questions.

As the bar tab continues to grow quicker than the list of six thousand questions they eventually compile, they start asking everyone they meet to invest in their new board game.

Who has 1,000 Canadian Dollars (equivalent to 62,000 Pesetas at the time) for a share in two party-loving expats’ trivia game?

And to be fair, it’s not hard to see why everyone politely declined. That is, everyone except the man serving the pints, the owner of the Cave Bar, perhaps sensing a chance to see a return on all those San Miguels.

“I’ve always been lucky,” reminisces Phil Donneson, 35 years on, about the moment he handed Chris Haney and Scott Abbott his $1,000.

Speaking for the first time at his home in Nerja, he tells the Olive Press: “But two years after they left for Canada I thought I’d never see that money again, I’d given up on the whole thing.”

Then one day the phone rings in the Cave Bar. It’s Chris Haney. He needs to speak to Phil, now.

“If he wants more money, tell him to get lost,” shouted Phil, also a Canadian expat, who has now lived in the Axarquia town for four decades. “And if he’s got a cheque for me…” he laughs, “tell him to stick it in the post.”

But before he even has a chance to cash that cheque, Trivial Pursuit has become a global phenomenon.

Fast forward to 2014 and Haney has sadly passed away, while Abbott lives a private, almost reclusive, life in his native Canada.

But rumour had it that the investor with the ‘luck’ was still living a quiet, unassuming life in Nerja, a place that hides its cultural significance with incredible modesty.

During a recent supplement on the area, The Olive Press heard whispers that the barman was still about, but was an extremely private man, who had never talked about his investment.

Nobody would even give us his name, so it was with some trepidation that I drove back to the thriving tourist town last week.

And they are certainly missing a trick.

For while thousands descend on Nerja for its beaches, restaurants and extraordinary caves every year – not to mention its connection to the 1980s hit show Verano Azul – nowhere does it say ‘Nerja: The famous home of board game Trivial Pursuit’.

But now, it seems, the town hall is finally taking an interest in this aspect of the town’s history, with the town hall planning a Trivial Pursuit tournament and even asking the Olive Press to help locate Phil to get involved.

It was certainly going to be a case of fun and games trying to locate the pensioner.

But we had an ace up our sleeve in the shape and form of Linda Maria Zima, a local estate agent, who knows everyone in the town having lived there for 30 years.

Zima was able to point me in the direction of the Cave Bar and its current owner Briton Nigel Jones.

Expat Jones turned out to be a close family friend of Phil and promised to get in touch on our behalf. A few hours later we were in luck.

Phil, now in his late 70s, still lives on the edge of Capistrano in a charming house with a fabulous garden, one of his true passions.

He has never broadcasted his story before and managed to avoid interested TV crews in the game’s early years. Born in South Africa, he retains that typical straight-talking honesty. 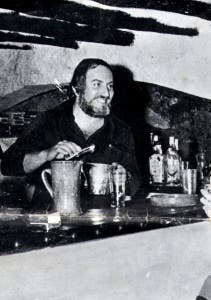 It emerges he moved to Canada when he was young and gained citizenship there before heading to Nerja and setting up the successful Cave Bar in 1974.

And it was not just luck that made him the successful businessman he is today. A thoughtful and astute man, he is well travelled and has a Masters degree in languages at the University of Manitoba in Canada.

He first came across Haney and Abbott when they walked into his bar in the winter of 1979.

Haney, a high-school dropout, had been working as a picture editor in Montreal while his friend Scott was a sportswriter.

They came up with the idea for their game while playing Scrabble and decided to quit their jobs in freezing Canada and move to Haney’s parents’ holiday villa in Nerja to concentrate on developing it.

With hindsight, this may not have been the most sensible decision in business terms.

“They were young guys, big boozes and they were having fun,” remembers Phil. “And they looked like a pair of hippies.”

It is certainly a well established fact that they had a penchant for San Miguel beer, the Spanish sun and the local girls…and this inevitably took its toll on the speed at which they produced the game.

Still, they were always testing questions on Phil and the other punters in the bar, quizzing anyone within earshot. In truth, Phil often complained to them that he was too busy to spend his days answering their questions.

They decided they needed 40 people to each invest $1,000 (equivalent to £300 at the time) and began pitching to everyone they could find in Nerja.

Phil’s friend Nigel Jones, told me that the legacy lives on in the regret of those who laughed away the opportunity to invest in the ‘hippies’.

Nigel and I took a stroll through charming El Capistrano village, modeled on nearby Frigiliana, to see the villa where the ambitious pair stayed, four doors down from where Phil used to live.

The village was actually used in several episodes of Verano Azul, and the cast were in and out of the Cave Bar.

Even Phil describes himself as a ‘reluctant investor’. Maybe it was the Canadian connection, his penchant for business or the fact they owed him such a hefty bar tab, but he was the only person who saw the potential in Haney’s ‘confidence’.

“He assured me he’d make me money,” he explains, adding the money was paid in the shape and form of a Canadian bank cheque. And he did. There have always been whispers in the pretty streets of El Capistrano as to how much the investors made and how much those who turned them down missed out on.

All that is known is that the creators became multi-millionaires.

Either way, it was a bumpy start. The game lost money at first and Phil lost contact with the chirpy Canadians for two years, along with his investment.

But unbeknown to those in Nerja who were taunting him for such a ‘foolish investment’, the game suddenly took off in Canada where there were queues outside shops and it was selling by the million.

And how did they celebrate creating the ‘biggest phenomenon in game history’? Answer: A massive cruise ship party with all the creators and investors.

At one in the early 1980s, they raffled off a collection of different Trivial Pursuit prototypes that never made it into production, and Phil won.

But that invaluable collection sadly never made it to its rightful home in Nerja. Heathrow airport’s luggage system had other ideas and the games were never seen again.

Until he died aged 60 in 2010, Haney would visit a luxury holiday home he built in Marbella from the proceeds most winters and from time to time paid a visit to his old friend Phil, back where it all started.

They sometimes met at Marbella casino for a flutter and a spot of lunch.

Now, 35 years after helping to launch the biggest board game in modern history, this Canadian barman remains as discreet as ever.

Asked to sum up the whole story, he puts it simply. “It was a nice surprise, shall we leave it at that. I don’t want to make any publicity from this. I have never wanted any fame,” he adds.