A MASSIVE 240-kilo shipment of cocaine entering the Spanish port of Huelva last week proved a no-brainer for police. The haul was located in one of the more obvious places – the yacht’s hull.

Had the Colombian gang responsible brushed up on their market research, they would have realised that greater ingenuity is called for in this day and age.

Spain is not the gangster’s paradise it once was. As the authorities tighten up checks at borders and airports, Organised Crime Rings (OCRs) are forced to become ever more inventive to get their illegal goods to market.

Such is the increased vigilance, even the King of Morocco was stopped off the shores of the Spanish enclave of Ceuta this week. Officers patrolling the waters for drug smugglers and human traffickers attempted to board the royal yacht, beating a grovelling and speedy retreat when they realised their mistake.

Last month, a Venezuelan woman was stopped at Madrid’s Barajas airport when particularly eagle-eyed customs officers noticed irregularities in her breasts. On questioning, the 43-year-old woman confessed to smuggling cocaine in her implants – quite literally a ‘drugs bust’ that revealed 1.7kg of white powder flown in from Bogata. The woman was rushed to hospital, lucky the back-alley implants stuffed with toxic drugs didn’t prove fatal.

Say It with Flowers

Whether concealed in food, floated into shore from remotely-controlled boats, stuffed in bags down trousers or encased in cargos of stone, Spanish police are up to all the traffickers tricks, old and new. In 2007 they seized the country’s biggest ever airborne drugs shipment, uncovering a mega two tonne haul of cocaine hidden among a cargo of 47,000 roses and carnations. 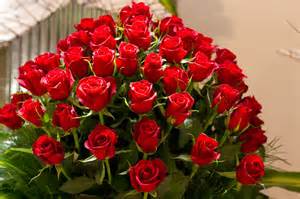 Often, drugs are swallowed in condoms, an especially deadly method as stomach acid can rot the rubber before the contents pass through the body.
And that’s not the only way the human body is being turned into a Class A postal service for drugs.
Earlier this year at Barajas airport, two Portuguese women were caught smuggling £150,000 worth of cocaine under their wigs on separate days. They each concealed 1.2kg contained in six packages taped beneath their ‘realistic’ fake hair.

“This new method of smuggling narcotics is very elaborate and difficult to detect due to the realism of the fake hair,” commented the Guardia Civil. “The packages were perfectly adhered and did not stick out from under the wigs, which made the narcotics imperceptible.”

Sometimes the real postal service is used. Drugs are hidden in souvenirs and gifts and sent to addresses in Spain picked at random from the phone book. On their return, the traffickers collect the packages, inventing a postal mix-up, leaving the recipients unaware they have played a part in drug smuggling.

For more industrial-sized deliveries, OCRs have turned to food. Recently, in a Costa Rican twist on a Pina Colada, drug-traffickers from the central American nation were busted transporting a 2,500kg cocktail of cocaine inserted inside a shipment of pineapples.

The contraband cargo – street value €150 million – entered Spain via the port of Algeciras and was transferred by road to Madrid. For the entire journey the traffickers were unaware they were being tailed in a special undercover police operation.

A more furtive foodie method was busted in Benidorm in May when 100 grams cocaine was discovered in the filling of a sandwich, along with cured ham and cheese – a variety not readily available at your local deli.

The 29-year-old Colombian was caught bang to rights, as police unearthed a further kilo of cocaine, and cannabis, at his home in the favourite British resort.

But the most heinous and inhumane method of drug smuggling was uncovered last December when a Colombian trafficker posing as vet was arrested in Galicia.
The bogus vet’s ‘speciality’ was surgically inserting bags of liquid heroin into the stomachs puppies being transported to the US. 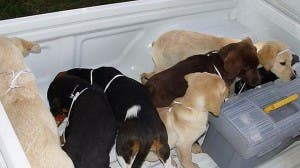 The manhunt began back in 2005, when six puppies were discovered on a farm in Medellin, Colombia, with implanted bags containing 400 grams of liquid heroin. The dogs were due to be flown to the US once the scars had healed. Three of the animals died during the process to remove the bags.

Medellin police Chief Ruben Carillo said at the time: “When we X-rayed the dogs we did not detect anything. Then we did an ultrasound and you could see the outline of the bags in their abdomens.”
The multitude of frequently horrific occult methods employed is mind-boggling but is there any technique that could slip past the controls undetected?

Who better to ask than the National Police themselves? Incredibly, that’s exactly what one audacious pot smoker did on Twitter in February. Even more unbelievably, he received a helpful reply!
“It’s better if you’ve already rolled them and hide them where the sniffer dogs don’t detect them, a cigarette packet maybe?” the Tweep informed him.

That is a genuine quote from the National Police Twitter feed, the world’s second most-followed law and order agency online, after the FBI.

The unguarded Tweet went viral before being removed and replaced with a new message:
“To avoid any confusion: possession and consumption of drugs in public places does result in fines.”

Of all the goods that are trafficked across the globe – from ‘ringer’ cars, counterfeit currency and art forgeries to arms, nuclear technology and human body parts – the ‘product’ that calls for the greatest invention is ‘people trafficking’. 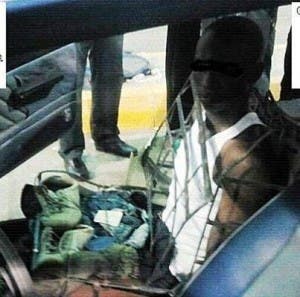 Desperate migrants will stop to make the perilous journey from Africa to Europe.
In March a young African pushed himself to the limit by squeezing into a suitcase, carried across the Spanish border between Melilla and Morocco by a friend.

He was discovered after border police noticed his friend struggling with the weight of the big blue case. When asked if he had anything to declare, he dropped the bag and ran.
Border guards arrested both the distressed suitcase stowaway – a 19-year-old from Mali – and his so-called ‘friend’.

Last summer, a couple was arrested in Malaga after trying to smuggle a 13-year-old girl into Spain by the same method.

The Moroccan man and Spanish woman were stopped by police as they entered Spain by car from Melilla with their unusually heavy luggage. They opened the lid to find the young girl, distressed and disoriented. She was not related to her traffickers.

One migrant from Guinea, entering Spain by the same route, had a better idea: hiding inside the frame of a Renault 7’s passenger seat, while another man sat on top.
The 20-year-old’s daring attempt was described by Melilla police as ‘unique and innovative’, but he still failed to elude them.