A WAR of words has broken out over one of the longest-running animal rescue centres on the coast.

A host of ex-employees, animal charities and a vet have denounced the ‘neglect’ and ‘filthy conditions’ suffered by animals at Kim’s Animal Rescue Centre, in Mijas.

The group insists that ‘numerous’ corners are being cut and pet passports are even missing necessary legal information.

In a series of statements handed to the Olive Press, the group claim the centre’s British expat owners Kim Halliwell and daughter Kelly are keeping dogs, cats and horses in ‘filthy, overcrowded conditions’.

A visit to the centre last week appears to back up these claims, while the Guardia Civil is currently involved in a case involving the mistreatment of horses.

Kim however, insists it is all part of an anonymous ‘hate campaign’ that has been gathering pace for a year.

“I first heard about this campaign against me ten months ago, I don’t understand it,” she said.

“I work 17 hours a day cleaning cages and looking after animals, all because I love them. I have no clothes and I never go out.”

The Mancunian added: “I have saved more than 5,000 animals.”

Her ex-husband Stan, who donated her the land a decade ago, blamed the crisis for her problems.

The former builder, in his 70s, said: “She has just had a tough time with the recession and a lack of much needed help and money.”

However, more than ten previous employees and volunteers beg to differ.

Insisting they remain anonymous out of fear of reprisal, they claim something must be ‘urgently done’ to help the animals, currently said to number 80 dogs and 117 cats.

“We have all experienced great distress at the centre and are broken hearted for the animals unfortunate enough to end up in their hands,” said a former volunteer.

“We want to stop Kim from ever being allowed to deal with animals again, and for the truth to come out.”

Another former employee even insisted that the centre had incorrect pet passports.

“Animals were transported illegally due to improper passports and on one occasion several dogs were smuggled into the UK without being checked by the authorities,” said the former live-in volunteer, who resigned in 2011.

The claim appears to be backed up by Jacqui Ross, who runs another centre Last Chance Animal Rescue, in Malaga, who recently took two Spanish Greyhounds from Kim’s.

“I can’t find the vet who signed off on their passports, I’m going to have to order new passports as the information is all incorrect,” she said.

Another rescue centre, CYD Santa Maria, has also denounced Kim to the Guardia Civil and the Ministry of Agriculture over the ‘mistreatment, neglect and starvation of horses’, after rehoming two of them.

While CYD president Concordia Marquez confirmed the case was going ahead, she insisted she was unable to discuss it for legal reasons.

Other workers insisted there was a serious lack of medication, and Kim’s ‘bedroom’ and bathroom often housed dozens of cats and puppies.

Claims included ‘small, filthy cages’, ‘tick-ridden animals’, a lack of ‘fresh air and sunlight’ and a lack of proper vaccinations.

A vet, who worked with Halliwell for a number of years, up to 2013, said: “It is clear there were far more animals there than she had the capacity for.

“Things have got out of hand there. There is room for 25 but she has around 200.

“She did all that she could for the animals, but simply didn’t have the funds for proper hygiene.

“We stopped working together because she couldn’t afford her last bill to me.”

KIM Halliwell claims that many of the attacks are from people who were sacked for not doing their jobs properly and she firmly denies the allegation of falsified passports.

“If it was dirty it was ultimately their fault,” she said. “No animals have ever died from neglect or a lack of medication.”

Meanwhile Laura Ellen, a helper at the centre, told the Olive Press: “She works ridiculously hard but she can’t manage alone.

“She desperately needs to raise more money but with this hate campaign against her that is so difficult.”

“We want to appeal for help for these animals, not spread anguish and hide behind anonymity,” added Ellen, who has lived in Spain for 11 years.

A spokesperson for Adana animal shelter in Estepona, added: “We have never heard anything bad about Kim’s, all of the centres on the coast are doing a very difficult job in very difficult circumstances.”

‘It made me want to retch’

ON the day of my visit the centre resembled a junkyard more than a proper shelter.

Kim’s daughter Kelly immediately started making excuses for the obvious filth, blaming it on the ‘lateness’ of a cleaning lady and her mother being on a dog-rehoming trip to the UK.

There was faecal matter everywhere, even streaked on the walls, cat litters were overflowing with dung, puppies were slipping on it, and it reeked of urine. It made me want to retch.

Kelly was talkative, knew the animals’ names and they seemed to have food and water available to them. There were certainly bags of food strewn here and there around the shelter.

I wasn’t shown the bottom shelters, stables, nor the properties at the side of the centre, which are allegedly where poorly animals are kept from prying eyes.

Either way, I would say a lot of work needs to be done here. 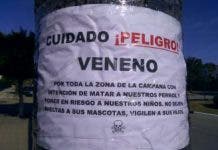 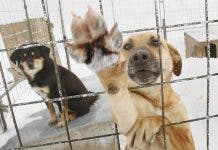 In Spain three animals are abandoned every five minutes