CHIEF Minister Fabian Picardo has been told to ‘keep up the good work’ by Prime Minister David Cameron himself at a Conservative conference in the UK.

Picardo also held a half-hour private meeting with the Foreign Secretary Philip Hammond at the conference in Birmingham, discussing matters of ‘mutual interest’.

When addressing the conference, Picardo warned that diplomatic action in Gibraltar’s waters may become necessary in coming weeks.

“I enjoyed seeing Philip Hammond again, having worked well with him when he was defence secretary. He is clearly going to be very much a ‘pro-Gibraltar’ foreign secretary,” added Picardo. 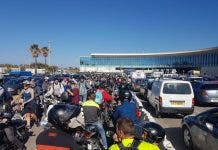