IN Turkey the expression used to describe unpleasant situations is ‘ayvay yemek’ or ‘to eat quince’.

And there is certainly nothing more upsetting than picking an apparently ripe quince from your garden and stuffing it in your mouth.

For under its deceptive smooth golden skin, raw quince flesh is hard, earthy and bitter.

And despite the fruit now being in season the vast majority will understandably ripen and then fall to the ground, where they will rot.

Luckily, help is now at hand. For the quince goes through a marvellous transformation when the fruit is cooked.

Just like apples and pears, the quince is related to the rose family and is seen in some cultures as a symbol of fertility, life and love.

As well as using them in the kitchen, Romans used to offer them to newlyweds as a wish of fertility while in Greece it was Aphrodite’s (the love goddess) sacred fruit.

The 4th century AD collection of Roman recipes, by Apicius, includes a quince dessert recipe which requires boiling the fruit with oil, honey, garum – a fermented fish paste from Tarifa – leeks and boiled grape must.

Surprisingly, the 15th century prophet Nostradamus was also an excellent cook who was particularly good at making jams.

In fact, in his Treatise on Make-Up and Jam he claimed his quince jelly was so good that it was ‘fit to set before a king’.

In Spain, quinces are often turned into membrillo de dulce which takes the form of a thick, sticky jelly perfect to serve up with cheese.

Quinces are also ideal to add flavour to meat dishes, be it boiled, roasted or baked.

In Morocco, quince is used in beef and lamb tagines, a highly seasoned casserole often spiced with cinnamon and cloves.

They can also make for excellent desserts, and a delicious breakfast compote.

Finally, quinces are sometimes boiled in spring cleaning as well as being stored in cupboards to keep clothes fresh.

HAVE a go at a perfect autumn vegetable stew with quinces recipe that brings the season’s flavours to the foreground.

Roast the quince, pumpkin and aubergine while frying the chopped onion.

Once the onion turns golden place it in a large pan along with the tomato, spices and oregano.

Peel and cut the roasted quince and vegetables into large chunks and place over the tomato and onion.

Add the chickpeas, a bit of water, then set to cook over a low heat for at least an hour. 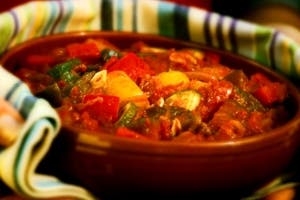