BAIL for the PP’s former treasurer has been set at €200,000 after prosecutors demanded he be jailed for over 42 years last week.

The ex-treasurer was arrested in 2013 after being considered as a flight risk by an investigating judge along fears he might destroy evidence related to the Gurtel case.

Luis Barcenas is charged with money-laundering and tax fraud in relation to the Gurtel corruption case. 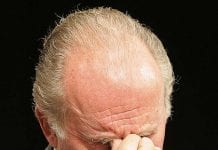