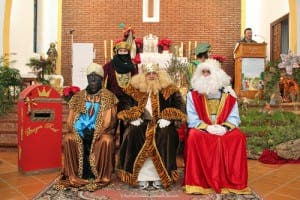 I WAS a bit reluctant to return to Granada after Christmas.

I was reminded of my Mum’s excellent home cooking and I found myself eating my way through the family fridge which had been stocked up (I admit, upon my request) with all the grub that I had longed for over the past previous three months: bacon, crumpets, gravy… In truth, I could have waited a bit longer before heading back, where an empty flat and lesson planning awaited me.

I did, however, have one main reason for returning earlier than I would have liked. Before the holidays, my flatmate, Sofia, had invited me to celebrate the festival of the Three Kings with her family in Ubéda, Jaen. I jumped at the idea, knowing that this cultural opportunity was not to be missed whilst in Spain on my year abroad.

In the run up to the holidays, I had delivered lots of presentations at school about how Christmas is celebrated in England. I told the kids about the food we eat, the festive songs we hear on the radio and the traditions that some families have. Little confused faces gawped at me when I casually mentioned how nobody gets presents on the 6th January – as they do in Spain. Most blurted out that they believed not in Santa – but in the Three Wise Men who bring them presents on 6th January – and my immediate impression was that this day was comparable to our Christmas Day in England – in terms of giving presents.

I managed to dodge the various questions that were fired at me from all corners of the classroom, making an excuse that the Three Wise Men always get lost en route to England because the winter days are so short there that there’s no bright star to guide them.

Thankfully most of them bought it.

The night I returned to Granada, I went out to see the end of the Cabalgata at the town hall, where three men dressed as Kings, deliver speeches to the children.  Cabalgatas are street processions that take place in the afternoon in nearly every town or city throughout Spain on the eve of the Three Kings. Children dress up in various themed costumes and throw sweets and confetti to the crowds of spectators watching and cheering beside them. The confetti-strewn roads in the city centre had been closed by police and there was definitely a sense of excitement in the air – the sort of excitement that a child feels before they wake up to see that Santa’s been in the morning.

The following day, Sofia’s Nan welcomed me with open arms at her house in Ubéda, where I was treated like one of the eleven grandchildren for the day. She proudly showed me the living room, which had been lavishly decorated with gifts for the whole family. “It’s what she lives for each year,” Sofia told me. “She loves Christmas, she always chooses a theme and she starts preparing for it in summer.” I was amazed. Sofia’s abuela had prepared all the food for a four course meal: homemade croquetas, meatballs in sauce, prawns, tuna… and I soon found myself eating Christmas dinner, round two.  After the meal, each family member and I had to choose one last present which had a few toy animals (as animals were the theme that that Sofia’s Nan had chosen) and varying amounts of money inside. This was all followed by singing and dancing. I had brought some things from England for the family – Cadburys milk chocolate, shortbread, flapjack, scones and sweets – all of which was eagerly tried and tested.

As I can now testify, the Three Kings is an important day in the Spanish calendar, much more so than in England, where the highlight of this day in my experience is taking down the Christmas tree and glumly watching how everything returns to normality. In the case of Sofia’s family and as I imagine with many Spanish families, this day in Spain couldn’t be more different. On reflection, it’s quite impressive how the Spanish celebrate the end of Christmas in such style. I guess this may not be the case with every family in Spain, so I realise how fortunate I was to have been invited to such a great celebration. I suppose The Three Kings is one way of actually respecting the longitude of Christmas– all twelve days of it – and for many Spaniards it’s something to look forward to after New Years’ Day.

At school, a few of my colleagues told me that it is becoming increasingly common for children to receive one or two presents from Santa on Christmas day, so that they have the remainder of the Christmas holidays to play with their long awaited gifts. I gathered the impression that the belief in Santa is much stronger than what it may have been ten or fifteen years ago, now almost rivalling that of the Three Kings. Even if these other ideas and customs are influencing how this festivity is perceived in Spain among the younger generations, I hope that for all its originality and religious purpose, this day continues to thrive.

I’ll remember the day when I celebrated the Three Kings in Spain for a long time and all the love, warmth and kindness that it involved. On the way back to Granada, I thought about my family at home and the person who would have had been assigned the task of taking down the Christmas tree and all the decorations after no doubt a normal day. What a big shame it would have been if I had been there, giving them a hand.