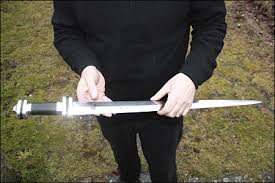 A SWORD-WIELDING 17-year-old man has dodged jail despite cutting a man’s ear in a street fight.

Instead he was handed a four month suspended sentence and ordered to undertake anger management sessions.

In the incident at Rosia Bay last August, the perpetrator removed the sword from his motorbike’s storage compartment and unsheathed it in broad daylight.

His victim was taken to hospital where he received stitches. A BB gun was also recovered from the man’s motorbike as police arrested him at the scene.