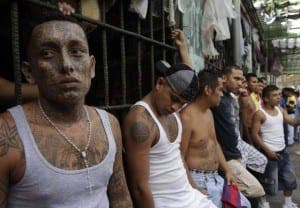 SPAIN is gearing up to deport 34 key members of violent Latin American gangs operating in Madrid.

The first two deportations will take place immediately, as part of the regional government’s new strategy for breaking up criminal networks before they take hold.

Those deported will also be banned from entering Spain for between five and 10 years.

The 34 leaders belong to five different gangs in the capital: 12 are members of Los Netas, eight belong to Trinitarios, seven are from Dominican Don’t Play (DDP) and five are from the Latin Kings.

The other two are part of La Maras gang which, according to chief police inspector Ricardo Gabaldon, is ‘not well organised in Madrid’.

Police have added that they are preparing to deport up to 94 more gang members in the coming weeks.

The Interior Ministry delegate for Madrid, Cristina Cifuentes, said the expulsions hope to prevent gangs like the Netas or the Latin Kings from getting a foothold in the city.

Details of the leaders’ nationalities have not been disclosed, but the gangs are mostly made up of youths from Ecuador, the Dominican Republic, Colombia and Peru.

Police estimate that there are 350 gang members in Madrid and many are repeatedly arrested. The most important groups hold between 60 and 70 members.

Immigration law allows the government to annul Spanish citizenship or residency permits and deport immigrants who have committed offences, but they must be members of gangs that have been defined by the Supreme Court as criminal organisations.