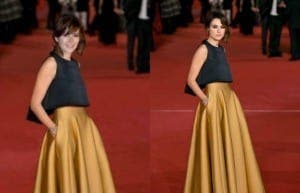 HOLLYWOOD is all about faking it to make it, but one Spanish actress has taken the concept to a whole new level.

Anna Allen, from Girona, has become the subject of internet ridicule after being busted airbrushing her face onto pictures of other celebrities, to make her career appear better than it is.

The unfortunate 32-year-old has now deleted her account after it was discovered she had shared fake snapshots of herself ‘attending’ the Oscars, with her 22,000 Instagram followers.

Allen’s attention to detail was impressive, even taking and sharing a photo of actress Lupita Nyong’o’s Academy Award invitation, passing it off as her own.

She also claimed she spent a ‘good while’ talking to Oscar host Neil Patrick Harris.

But it was her bizarre move to Photoshop her face onto the body of another, as yet unknown, attendant at the ceremony that really took things too far.

Wearing a black top and a gold skirt she claimed it was her, not the guest, on the famous red carpet.
Looking closely, you can see how she has superimposed her face onto the shot.

It has now emerged that the Spanish TV actress has been pulling such fake stunts for years.

In one post last year she was seen taking the place of British actress Romola Garai alongside actor Jonny Lee Miller from a shot in 2009.

Another photo appeared of her allegedly posing with the cast of the British TV series, The Big Bang Theory.

Allen, who has appeared in various Spanish TV shows, has now become the subject of internet ridicule with users creating pictures of her aboard the Titanic, and in Ellen DeGeneres’ place in the infamous 2014 Oscars selfie.