EVERY September Manilva celebrates its winemaking tradition with a three-day harvest festival.

Think flamenco dancers, brass bands, music and dancing into the early hours in the Plaza 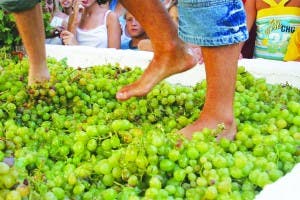 The sweet Moscatel grapes have been grown in the vast vineyards surrounding Manilva since the 16th century and are used to make the aptly named Manilva wine, famous throughout Spain.

Manilva took up winemaking as its main economic activity after the Spanish Civil War because of its ideally-suited climate and soil.

The festival was founded in the early 1960s and has become a red letter day on the local calendar, drawing visitors from across the region to see the winemaking process.

As well as making the sweet dessert wine, the muscatel grapes are also dried on the hillsides to make the famous ‘Malaga raisins’.

“We have seen a lot more people interested in buying the sweet wines over the last few years,” explains local shopkeeper Maria Esteban, who sells the wine, plus numerous other local products, from her unmissable shop Frutas Pascal y Hijos, on the way into town.

As well as nuts and pulses, there’s a huge range of fruit, including locally-grown avocados and cherimoyas, which originate from the Andes and thrive in the protected coastal valleys here, fed by the rich sulphurous waters.

The creamy texture of the flesh gives the fruit its secondary name, custard apple. Mark Twain called the cherimoya ‘the most delicious fruit known to men’.