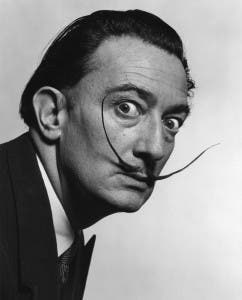 SURREALIST painter Salvador Dali is the latest Spanish icon to become embroiled in a paternity suit.

A woman has filed a suit against the heirs of the artist, requesting her DNA be tested against the painter who died 26 years ago.

The suit was filed with judges in Madrid on March 13, the day after a similar case against King Juan Carlos’ was thrown out by the Supreme Court.

The woman, María Pilar, was born on February 1, 1956. She claims her mother, Antonia, had a secret affair with the painter during the 50s after they met in Dali’s hometown of Port Lligat, on the Costa Brava.

Pilar’s mother had previously requested a DNA test for her daughter after Dali’s biographer commented on the resemblance between Pilar and the artist.

After sending him DNA samples, the biographer went quiet and DNA results were never sent to Pilar.

Her lawyer, Francesc Bueno, confirmed that Pilar is filing the suit against the tax office and public administration, as well as the Dali Foundation which acts as Dali’s official estate.