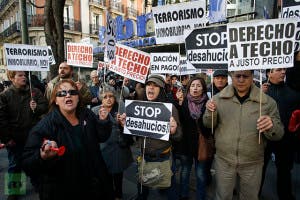 THE Spanish senate has approved controversial plans to change the country’s security laws.

Nicknamed the ‘gag law’ by activists and human rights groups, the change in legislation will crackdown on protests as well as the most vulnerable members of society, including sex workers, drug takers and the homeless.

The law is expected to be ratified at the end of this month. Once it is fines of up to €30,000 will be imposed on anyone deemed to be ‘degrading public property’ or causing ‘serious disturbances of public safety’.

She also made a plea for the Senate to ‘ensure that the government doesn’t erode basic rights and freedoms in Spain’, but it would appear to have fallen on deaf ears.