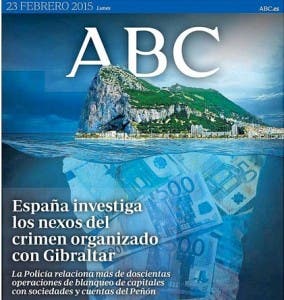 THE Gibraltar government is suing a Spanish daily national over a front page story which pictured the Rock as an iceberg of dirty money.

The article, which appeared in ABC newspaper, labelled Gibraltar a ‘tax haven’ and alleged it is home to ‘15 organised crime gangs’ connected to drug smuggling, money laundering and the Russian mafia.

A defamation claim has been launched by the government, who claim the allegations are ‘wholly inaccurate and damaging to the reputation and name of Gibraltar’.

“The government is not prepared to tolerate this kind of journalism and has therefore taken legal action against the ABC newspaper and its editor, calling for the publication of a correction and an apology,” said a spokesman.

John Culatto - 29 Sep, 2022 @ 16:45
THE Gibraltar Government has said it is ‘unacceptable’ that the Ministry of Defence has closed down Gibraltar Airport on Thursday afternoon, forcing flights to...