IT is tipped to be the most exciting Spanish regional election for decades.

And whether you’re dusting off your protest placards or battening down the hatches, one thing is certain: with two major new contenders threatening to upset the ‘establishment’ applecart, Andalucia is preparing for battle.

D-day for political warfare is this Sunday (March 22) and, as the first region in Spain to vote, the entire country will be watching Andalucia for signs of change that could have a ripple effect throughout Spain and set the trend for the general elections later this year.

The two main newcomers are Podemos and Ciudadanos, polling around 15% and 10% respectively – and each demanding an end to the long-running corruption carve up that has loomed over the PSOE-run Junta for the last few years.

In total, it is estimated that 6.5 million people will flock to the polling stations to deliver their final verdict on the campaigners who are pushing their candidacy for power in the regional elections.

Those vying for votes? Step forward:

The next few days will be critical for the election campaigns of these parties as, if change happens for Andalucia, the rest of Spain could well follow.

A political changeover in Andalucia would be nothing short of ground-breaking.

It has been a shoo-in for the PSOE since the Junta’s inception in 1982 – a staggering 33 years.

It is the only autonomous community in Spain that has not seen one single change in government, which makes these elections even more exciting.

But with Podemos bursting onto the scene last year and taking the political arena by storm – polling nationally at around 22 to 25% – Diaz has seen her socialist reign put in danger.

Pablo Iglesias, the charismatic, pony-tailed leader of Podemos, expressly identified the Andalucian elections as the start of his 2015 election campaign, although he admitted he was not expecting to win.

And this was ruled a practical certainly when Diaz pulled a masterstroke on January 26 by calling a snap election for this month, surprising everyone around the region.

Coming out all whiter than white, her strategy was to proclaim her own party’s desire to clean up corruption before Podemos had a chance to gain ground.

What remains to be seen is whether that early doors move has paid off.

It certainly looks to have done, and with Podemos not even having a candidate for the region in January, Diaz got a fabulous head start.

If this was the final result it would mean the PSOE would need to form a pact with either the PP, Ciudadanos or Podemos to keep the whip hand. Both extremely unlikely bedfellows for Diaz. But power is a heady drug and she will find someone to snuggle up to.

The most exciting pact would be with Podemos, which would strongly test the new party’s promise to clear up corruption.

Would getting into government mean them being able to get into the closet to find any more unpleasant PSOE ghosts, such as the ERE and the Casa Edu scandals?

Another inescapable element at play for Diaz is her pregnancy.

The 40-year-old, who is almost five months pregnant and due to give birth to her first child in July, has claimed it ‘should not be an obstacle’.

“I want to give my son a better Andalucia than the one left to us by our parents,” she has claimed, spinning the happy event in an electorally positive light.

For expats – who can vote in local and European elections but not at regional and national level without Spanish citizenship – all that remains is to sit tight and watch the drama unfold. 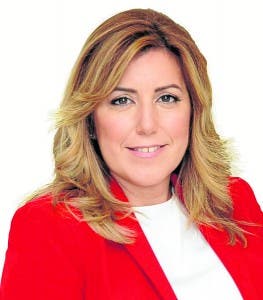 WHEN Susana Diaz called for the elections to be brought forward, she took a risk.

Her official line pointed towards an unstable leftist coalition with the Izquierda Unida, but her ulterior motive was really to extinguish the Podemos fire before it grew too fierce.

Either way, the snap elections still provide Diaz with the biggest test of her career to date. Born and educated in Sevilla, the seat of the regional government, politics runs through her veins.

She became Junta President in 2013 when predecessor Jose Antonio Griñan resigned, sweeping the board with the approval of more than 21,000 members of her party.

Since then she has promised to stamp out corruption once and for all, while focusing on equality and opportunity for all. However she has still come in for her fair share of criticism, in particular for not expelling former leaders Griñan and Manuel Chavez, both involved corruption investigations, from the party

There’s just one stumbling block. In this ‘year of change’, Diaz faces a mammoth task in persuading Andalucian voters to invest in yet another term of a government that has been in power without a break for 33 years.

And as if that isn’t tough enough, she is expecting the birth of her first son in July. 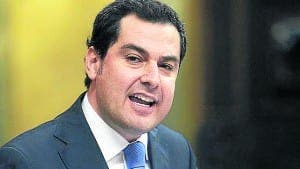 FAMILY man Moreno was born in Barcelona in 1970 and has risen through the political ranks of the PP party with remarkable speed.

Affiliated with the party at 19, at 23 he was leading the party’s youth organisation, Nuevas Generaciones, in Malaga.

He held the national position of Secretary of State for Social Affairs from 2011 before becoming the PP’s Andalucia President in February 2014.

Emphasis has been placed on Moreno’s humble origins, with his grandparents having worked as ‘journaleros’ or day labourers, while his parents emigrated to Catalunya.

Sadly for him, in a recent poll, one third of Andalucians didn’t even know who he was. 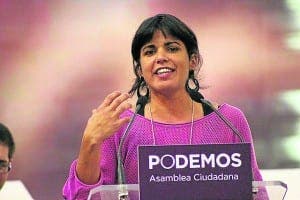 TERESA Rodriguez has established herself as a key player in the Podemos march to political revolution. And it’s not just a ‘purple patch’.

There are high hopes that she will be the party’s first representative in regional government.

Hailing from the US naval base town of Rota, the 34-year-old former Professor of Literature established herself as a political force from her militant student days with the leftist IU party.

A member of the European Parliament, her position of influence has been visible for all to see since the anti-corruption party formed in January 2014.

Even an alleged nudist beach picture has failed to fluster the unflappable politician.

If elected, she has vowed to implement anti-corruption measures as well as operating a ‘far more transparent’ office in terms of government spending.

She may be unlikely to win outright, but Rodriguez will no doubt have more than a say in how the elections pan out.

And don’t be surprised to see the PP and PSOE battle it out for her political ‘hand in marriage’, as a coalition is highly possible. 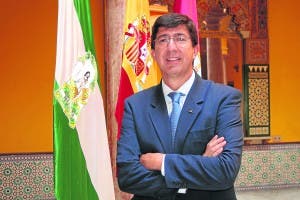 WHEN Juan Marin’s party makes its Andalucian election debut this year, it could prove to be one of the big surprises.

Promising to battle corruption and unemployment the ‘Podemos of the Right’, as the party has been dubbed, pledges to bring an end to the ‘failures and lies’ of past administrations.

Although the party only launched major activity in the rest of Spain in 2013, it has been a key force in Catalunya since 2005, and crucially wants to remain in Spain. 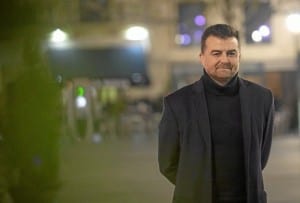 UNTIL the end of January, Maillo, 48, and his party were governing Andalucia in an uneasy coalition with the PSOE.

The three-year partnership was the first time the amalgamation of communists and greens, collectively known as the ‘United Left’, had managed to get a foothold in the Junta’s corridors of power.

But with the looming threats of Podemos and Cuidadanos, cycle-riding Maillo has pulled away from the alliance and wants to distance his party from the PSOE.

The Sevilla professor – who wants to introduce hundreds of cycle paths around the region – wants a better, fairer region.

“The economy should service the society, and not the other way round,” he announced in a recent speech.