ONE of Spain’s worst conceived macroprojects Los Merinos has been finally sunk by the Supreme Court after almost a decade of legal warfare. 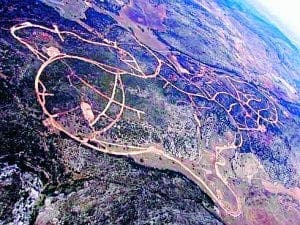 The double golf course, hotel and housing complex on UNESCO-protected virgin land, near Ronda, was one of the most controversial in Andalucia’s history.

So heated was the opposition to the plan – promoted by a former head of the Junta’s Department of Public Works – that thousands protested publicly and the local town of Cuevas del Becerro called a general strike.

Anger mounted after the developers started work on the scheme, cutting down hundreds of protected oak trees, despite not having the final work licences.

Two local green policemen (‘patrulla verde’) working for Ronda Town Hall were taken off their jobs and put on traffic duty for putting through unfavourable reports.

When a trio of local expats joined a campaign by the Olive Press to oppose it, they were wrongfully sued by the developers to the tune of 21 million euros, dubbed as ‘mafia tactics’ by a Judge.

Both Ecologistas en Accion and Greenpeace opposed it, while UK newspapers, including the Times, Independent and Guardian, followed up on our many stories.

However, after all that, it was not local opposition that stopped the scheme, which would have been 783 houses built on 1000 hectares, but the fundamental issue of water.

Despite numerous appeals from the developers and Ronda Town Hall, the Supreme Court has backed the TSJA Andalucian High Court ruling that the €18.9 million macroproject would have affected the water supplies of at least seven neighbouring towns and villages.

Spain’s Hydrographical Confederation expressed its ‘overwhelmingly unfavourable position’ on the development, which led to the TSJA court’s retraction of the licence.

The first ever issue of the Olive Press campaigned against the proposal back in November 2006, when developers blocked a national footpath the GR-7, and we have followed the case’s twists and turns ever since.

Ronda Town Hall announced a few months ago that it was negotiating hard to try and preserve the project, proposing 400 houses and one golf course less.