WHETHER it’s ex-England footballers or Hollywood hotshots, Andalucia has that A-list appeal that keeps the celebrities coming.

From British royalty and Saudi sheikhs to the Obamas and Lady Gaga, swanky resorts like Sotogrande and Marbella are prime destinations for high-profile holidaymakers and many a famous face has decided to stay put for good.

From the early days when Audrey Hepburn and Cary Grant could be spotted chatting over breakfast in Marbella, through resident ‘stalwarts’ like Antonio Banderas and ‘fallen stars’ like Max Clifford, to the current batch of publicity-hungry reality TV celebs routinely spotted falling out of clubs, the trend shows no sign of abating.

And with the region’s growing reputation for five-star infrastructure and first-class cuisine, as well as its well-catalogued sun, sea and sangria lifestyle, it’s easy to see why.

So who’s buying into the Costa del Sol dream today and, more importantly, where do they hang out? 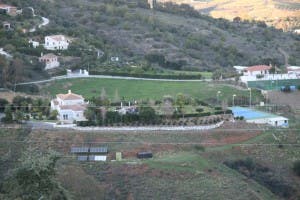 Hidden away in the hills above the Costa del Sol in Alhaurin, Status Quo rock legend Rick Parfitt can often be found kicking back in his decadent mansion with his wife and twins, Tommy and Lily. With tennis courts, a swimming pool and a garden to rival any horticulturist’s wildest fantasy, Parfitt’s pad is the perfect hideaway. 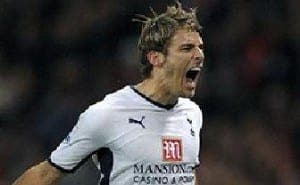 Once dubbed the ‘next David Beckham’, the former Tottenham and England footballer David Bentley hung up his boots at the age of 29 for a new life on the Costa del Sol. Now involved in a string of hip hangouts including popular La Sala in Puerto Banus, when he’s not socialising with the clientele Bentley can regularly be spotted practising his swing on the golf courses around his beautiful family home in Benahavis (pictured left). 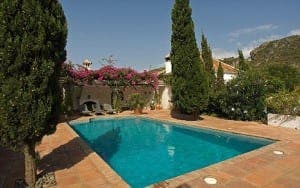 Former MEP and TV personality Robert Kilroy Silk has a huge mansion in the hills near Casares. The 11-bedroom converted olive mill is used as a holiday home by the former Kilroy host. When he is not in residence, he rents out the property for an eye-watering €12,700 a week. 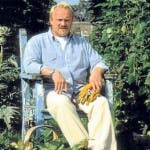 TV chef Antony Worrall Thompson may have fallen from the dizzying A-list heights he reached with Ready, Steady, Cook in the 1990s, but he is still enjoying the high life, making regular trips to his avocado farm in the hills above Mijas. He’s also been busy in Gibraltar of late where he’s a judge on GBC TV’s hit reality cooking show, Rock Chef. 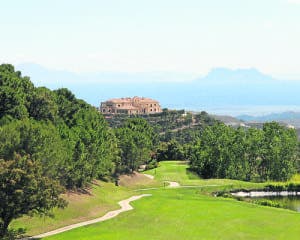 Russian president Vladimir Putin is well-known for his admiration of excess and the construction of his Benahavis mansion in the hills above Marbella is no exception. Kitted out with two swimming pools, a cinema and a €1 million wine cellar, Vlad’s pad is one of the most enviable in Andalucia.

England international and Liverpool footballer Glen Johnson can often be spotted lapping up the post-season sun in his sensational Sotogrande home. Its polo fields are a favourite divot-stomping ground for royals like Princes William and Harry. Leafy Sotogrande’s multi-million euro mansions have attracted a number of soccer stars in recent years, including Shay Given, Glenn Hoddle and Brendan Rodgers. 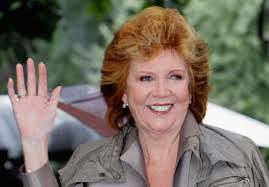 The former golden girl of Saturday night TV is pushing 72 but Cilla Black still gets ‘a lorra laughs’ chilling at her luxury Estepona villa. That was until last year when her luxury pad was struck by a fire while the ex Surprise Surprise host was in the UK. Happily, a renovation job looks to have restored the property to its former glory and our Cilla should be back for another date with the coast this summer. 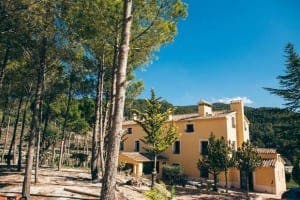 Not in Andalucia… but worth a mention nonetheless, is former England manager Terry Venables’ Alicante retreat. Taking on his latest managerial adventure Venables has transformed a 500 acre olive grove into a luxury Spanish hideaway. El Tel opened up to the public in October, with guests paying a tidy €200 per night.

One of the men behind the Great Train Robbery, criminal mastermind Gordon Goody, has gone from bad to the ‘good life’ on a farm in Almeria. While his criminal associates – Ronnie Biggs and Bruce Reynolds (to name just two) – became cult figures in the UK, Goody escaped to Spain to run beach bar Chiringuito Kon Tiki in Mojacar.

10 celebrities who own hotels in Spain