AN expat couple are to appear on the latest episode of Channel 5’s Horror Homes after their dream villa in Vera, Andalucia, was knocked down. 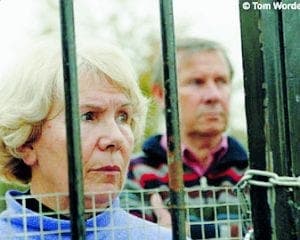 Len and Helen Prior saw their home bulldozed in January 2008 over ‘planning irregularities’, as reported in the Olive Press at the time.

The couple, from Berkshire, initially received a call telling them that their home was to be demolished.

This was despite having the correct paperwork signed off from the town hall.

“This whole mess would be bearable if it made any sense,” Helen told the Olive Press on the fifth anniversary of the demolition.

They are still fighting for compensation and have admitted they will have to file for bankruptcy if they do not receive it soon.

The land, which they originally bought for 152,000 euros, is now practically useless as they cannot build on it.

Len says on the show: “We lost more than just money, we’ve also lost seven years of our lives from fighting this.

“I’ve been really angry day and night for seven years and we really want somebody to say ‘we made a mistake, it shouldn’t have happened and won’t happen again’.

“That would be the best thing.”

The programme begins at 8pm.