ANTI-austerity party Podemos are to meet with bosses at the International Monetary Fund (IMF) tomorrow.

The IMF chiefs set up the meeting after Podemos’ strong showing in regional and municipal elections across Spain last month.

The meeting has been arranged so Podemos can present their plan to reduce Spain’s national debt if they are successful in November’s general election, according to GlobalCapital.

As requested by the IMF, the secretary general to the Spanish Treasury, Rosa Sanchez will also be in attendance.

Podemos’ senior economic adviser Eduardo Gutierrez said the May elections had ‘sent a clear message’ to the world and international markets are now preparing for a Podemos-lead Spain.

Podemos deputy leader, Isabel Serra Sanchez, sentenced to 19 months in prison for her intervention in an eviction in Madrid in 2014 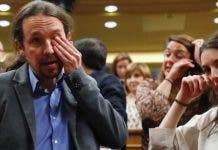