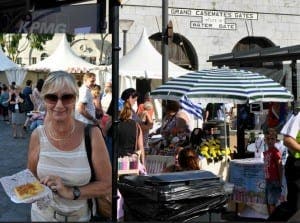 ‘CALENTITA’.  It sounds like a cat call appreciative construction workers might shout out to hot young chicas.

In fact, Calentita Night is named after something that looks like my failed Yorkshire Pudding.

It’s a pancake made with chickpea flour, water and olive oil, and an acquired taste, if I’m honest! But, as the local cuisine was inspired by 14 sieges and 16 years of border closure, cooks had to be dab hands with basics and can openers.

Now in its 9th year and touting 47 food stalls with entertainment thrown in, Calentita Night has grown more rapidly than Greece’s national deficit – and Greek was one of the cuisines you could try.

‘Stuffed vine leaves’, I salivated as we scanned a posh Sunday Times Colour Supplement-sized programme to pick out our favourite stalls and see what time dancing dervish Jonathan Lutwyche of Britain’s Got Talent fame would be performing on stage.

We arrived early and a good thing too, as according to official records 5,998 other people turned up on the night – swelling Gibraltar’s 30,000-something population by nearly one fifth at a stroke!

The first surprise was Market Place bus terminus, transformed beyond all recognition by a crescent of glossy pvc Camelot-style jousting tents selling everything from Cuban mojitos to American hot dogs.

A giant Argentinean barbecue weighed down with 180 kilos of sizzling meat cuts, and three long baronial tables placed alongside, seemed an open invitation to get stuck in and toss the bones over your shoulder as they did in the Middle Ages.

But there were litter bins and signs about using them everywhere. You could even enter a lottery to win an ipad Air if you saved waste by bringing your own plates and cutlery!

Ultimately, the tinted glass windows of my local bus shelter proved a Godsend for indulging in some incognito Medieval guzzling away from the public eye. With the Moorish Castle lit up above, I felt like the Lady of Shalott – and you could get those too at this homage to the home cooking of the amazing multicultural society resident on the Rock, or close by.

The Nepalese with their curries and dals, the Hong Kongese with their dim sum, the Germans with their magnificent bratwurst, all cooking up a storm to raise funds for their favourite charities; the quintet of beaming Filipinos serving up sizzling spring rolls smothered in chilli sauce.

“We’re from the Filipino Association of Sotogrande and we like to keep our traditions alive,” they told me. “Watch out, very hot.”

Which sums up Calentita Night, now added to a lengthening list of festivals that are turning the Rock into one very hot ticket, topped by the Music Festival in September – Glastonbury in the Med, without the mud. See you there!