A 21-YEAR-OLD British man is in critical condition after falling seven metres from a hotel balcony in Magaluf.

The man reportedly jumped from the balcony at 4am yesterday, sustaining injuries including a broken arm and contusions, in what is being called another instance of ‘balconing’, a dangerous activity involving the use of balconies as platforms for jumping into swimming pools or to neighbouring balconies.

Balconing has become popular among tourists, chiefly Brits, in holiday destinations such as Mallorca and Ibiza. 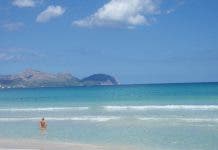