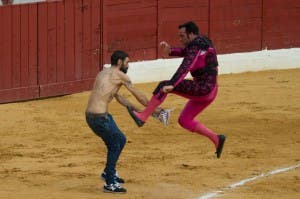 WHEN you think of the art of the bullfight (and I’m using that word advisedly, trust me) you think of the apparent grace of revered matadors such as Manolete, the mere mention of whose name makes ancient aficionados go all misty eyed.

And they have to be pretty ancient, as the great Manolete met a sticky end from the business end of a bull called Islero in the 1940s.

At a recent bullfight in Marbella, however, matador Morante de la Puebla showed that bullfighting is apparently embracing martial arts. The bullfighter was celebrating the third kill of the afternoon when an anti-bullfighting protester ran shirtless onto the bloodied sand.

This enraged Morante to such an extent that he charged, somewhat like a wounded bull, at said protester, leaping into to the air and delivering a kung fu kick, à la Bruce Lee, at him.

(As an aside my own karate skills are more akin to Loose Brie than Bruce Lee, but I digress).

The startled and winded protester was then nabbed by a combination of police and bullfighters and bundled off.

I think that this move could mean the start of an exciting new phase of the “noble art” and can’t wait to see the next 500-kilo fighting bull that Morante comes up against. He’s bound to prove how manly he really is by getting rid of all that cape and sword business and taking the bull on, unarmed and using only his new-found martial art skills. After all, the Chinese are a growing market for all things Spanish, so this Kung Fu Corrida could be the next big thing.

I’m not holding my breath though!

Beauties and the beasts: A look at some of Spain’s female bullfighters