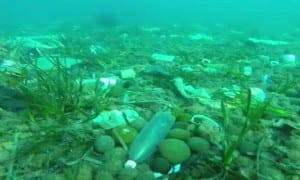 AN international rescue mission for the world’s seas has landed in Andalucia.

The Ocean Crusader mission to clean up the world’s seas has launched its Spanish leg of the world tour in Almeria.

Founders, Australian Ian Thomson and his Swedish wife Annika Fredrikson, spent two days meeting marine biologists in Almeria on the latest leg of their tour which will also take them around the Balearics.

Talking about the impact litter can have on marine life, the pair are attempting to save the depleting seas.

In fact, marine life has halved in the last 45 years with many species on the brink of extinction.

The Olive Press launched a campaign Bin the Bags in 2008, in a bid to force supermarkets and other shops to levy a charge on plastic bags.

Since then a law has come in with most supermarkets charging at least two cents for a bag.

However, it is clearly not enough, with a whopping 75% of tuna having disappeared from the world’s oceans in the past 40 years, according to the Living Blue Planet.

One in four shark species are also at risk of extinction. While four out of seven leatherback turtles are under threat and sea cucumber numbers have decreased by 90%.

Walter Finch - 8 Feb, 2023 @ 14:15
There was horror on the streets of Madrid as a visibly furious man set himself ablaze outside the Moroccan embassy, with the motive for...