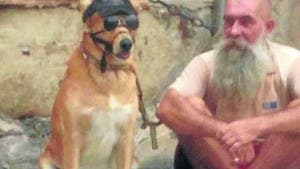 A CAMPAIGN to remove a dressed-up dog from his homeless owner has been launched in Malaga.

The owner is accused of forcing his dog to wear sunglasses and a police cap, and also placing a studded collar around his neck to stop him from moving.

The spikes on the collar allegedly dig into the dog’s neck when he moves, allowing his owner to keep him in check as a street performer.