IT’S the place you were always warned to avoid. 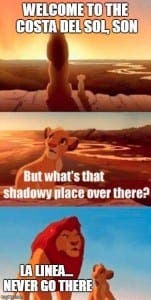 If there was a Disney film set on the Costa del Sol, La Linea de la Concepcion would be the dark, evil area in the cloudy distance that is rarely mentioned. And when it is, people look at their feet and shuffle awkwardly.

Until one day, a young naïve character explores too far west of his home and stumbles across the town he has been forbidden to enter.

And here’s the plot twist. It is nothing like he had been taught. La Linea isn’t gloomy and depressing, the people aren’t monsters and the tapas bars don’t serve up rats’ tails and toads’ eyes.

I know it sounds like a future box office record-breaker, but that’s also the best metaphor I could think of for the last few months of my life, in which I have departed conventional expat territory for the not-so-glamorous La Linea.

My friends tried to stifle looks of horror when I said I was moving to Gibraltar’s doormat, but I quickly realised there’s a lot more to life here than those on the Costa del Sol think there is.

There are many charming squares decked out with quirky bars and some of the best tapas bars I’ve found in Spain, plus two rather special beaches.

But La Linea’s defining feature is its powerful expat contingent; the Gibraltar workforce.

Is there anywhere else in the world where such a large percentage of the residents go to work in a different country every day?

People from all over the planet and from all walks of life have wound up in La Linea, crossing back into Spain after work each evening with a big smile, knowing that their daily wage has just increased in value by a third.

And La Linea has grown to cater for its social niche. The nightlife here is buzzing year-round, unlike the two months a year in my previous home of Estepona.

There is a busy Wednesday night language intercambio, live music events and an Irish pub which stays open ’til the early hours.

Now it wouldn’t be a proper Disney storyline without meeting some kind of princess, mermaid or Pocahontas-figure… so it’s off to the Irish bar for me I guess. I’ll let you know how that pans out.