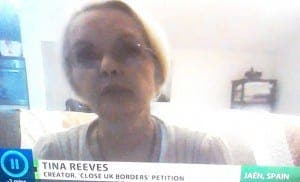 THE woman behind a 500,000 signature petition to close UK borders spends most of her time living in Spain.

Online campaign organiser Tina Reeves has come under heavy criticism after she conducted a TV interview from her home in Jaen.

Reeves’ petition to force ministers to debate border control has gained a lot of support following the ISIS attacks in Paris.

However it has now emerged that Reeves spends at least half of her time at her Spanish bolthole and has done so for the past 26 years.

In fact, the 62-year-old is married to a Spanish farmer, Pepe Garcia.

However, the irony is lost on the mother-of-two.

“I don’t think there is hypocrisy,” she said. “I worked in Spain initially, many years ago, before it joined the EU, and I didn’t need open borders to allow me in.

“To the Spanish government I would be an immigrant but not to my friends or children. I can’t see the argument.”