CAVIAR king Diego Gallegos breaks out into a hearty laugh. The 31-year-old Brazilian chef is fondly recalling the night he learned his Fuengirola restaurant Sollo had won its first Michelin star – and the drunken revelry that followed.

Gallegos flew to Santiago in Galicia for November’s awards ceremony, unaware he was going to win cooking’s most coveted prize. But the champagne corks were soon flying.

“I went there not expecting to win, just to be at the.party,” he says.

“It was a wonderful surprise. We drank a lot until the next day. I didn’t sleep at all, then the next morning I caught a flight from Santiago and came back to prepare everything at the restaurant.” He pauses, more serious now. “The clients and the restaurant always come first,” he says.

Gallegos’ was already scaling the heights of fish-based wizardry following his award for most ‘revolutionary’ chef at this year’s Madrid Fusion.

Now his 14-cover Sollo (there are 24 more seats outside) has scooped one of eight Michelin stars awarded to Malaga as the region’s burgeoning food scene goes from strength to strength.

Gallegos’ exquisite fish dishes, such as sturgeon skin dippers and garlic, caviar and goat nectar have earned worldwide-accolade from the likes of Gordon Ramsay.

But his modernist take on sturgeon and caviar pays more than a nod to Spain’s culinary past. Sollo, an old Andalucian word for sturgeon, is mentioned in Don Quixote..

And a visit to a matanza, a traditional Andalucian pig slaughter where every part of the animal is used, inspired him to adapt this centuries-old custom to his radical fish dishes.

“Last year my first 12-course tasting menu was based on a matanza,” he says.

“I changed all the pork meat for sturgeon meat. Everything was made in the traditional way of the matanza. Chorizo, black pudding, salami – everything they make with the pork, but with sturgeon. It was very difficult. To produce three kilos of black pudding I had to kill 25 or 30 sturgeons.”

Thirteen years ago, it was the more prosaic art of frying fish that sparked an 18-year-old Gallegos’ career in professional cooking. Gallegos came to Spain to study law, but swapped his books for a set of knifes during a spell cooking in a Malaga beach restaurant.

He would later work alongside two-Michelin starred chefs Dani Garcia, in Marbella and Angel Leon, in Cadiz, where he honed his talent.

But he developed his passion for sturgeon in particular while cooking in Granada at his wife’s uncle’s restaurant, Casa Piolas.

“I decided to make sturgeon my restaurant speciality. I’m from Brazil, where river fish is very big, In Spain they don’t really use it,” he says.

“I also started to use tilapia, which is very popular in South America. I found a supplier in Cordoba. It’s an old fish that originally comes from the Nile. It’s very good for ceviches.”

Gallegos opened Sollo in November 2013 (they moved to their current venue seven months ago) where he ‘risked everything’ by removing meat completely from the menu.

Sturgeon and caviar take pride of place on Sollo’s 15-course menu, available for €60, and the 22-course tasting menu. A glance at the dishes and you can see why Michelin judges were licking their lips.

The glittering firmament of stars bestowed on Malaga in the 2016 guide doesn’t surprise Gallegos. Asked for the secret of the region’s success, he doesn’t hesitate in locating the source.

“It’s because we have a very good and famous school, La Consula. Most of the chefs come from that school,” he says.

Gallegos is himself an alumnus of that establishment. But despite his exciting talent, Gallegos is adamant the Michelin award was a surprise, and is mindful of the need to keep a steady head as his stock rises ever higher.

“I never expected in seven months to take a Michelin star,” he says.

“After one or two years, we will try for the second Michelin star. But not this year or next. It’s not a 100-metre run. It’s a marathon,” he adds. 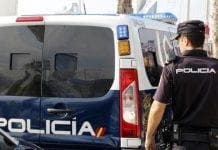 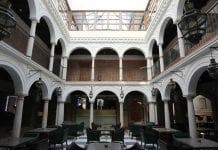