IT was perhaps inevitable that having got their wines into dozens of Michelin-starred joints around the world, they would open a restaurant of their own. 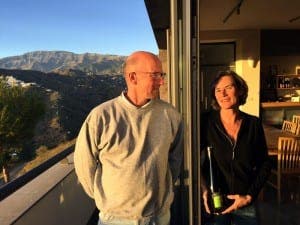 Now talented Clara Verheij and Andre Both, from Bodega Bentomiz have inaugurated a stylish new place to eat for diners in the Axarquia.

With the help of Nerja chef Juan Quintanilla, of Sollun, they have created an alluring three and five-course tasting menu, which can be paired with the vineyards six different wines.

Sitting on the top floor of their stylish bodega, you eat in an airy dining room with amazing views of classic Axarquia scenery.

The dishes, which are as handsome as they are creative, use mostly seasonal and almost all local ingredients… and cleverly pair the couple’s wines.

Hence, the vineyard’s intriguing red – made from Petit Verdot, Tempranillo, Cabernet Franc and the local grape Rome – is used to slow-cook iberian pigs cheeks, with shiitake mushrooms and sweet potato and then served up alongside. 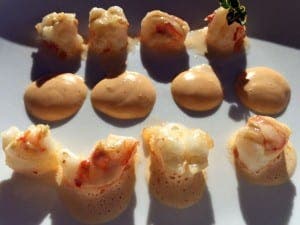 Meanwhile, a foam of parmesan, popcorn of rice, cooked with seaweed is paired with one of their fabulously flinty Moscatel Ariyanas whites.

It is a decade since they first rescued this abandoned vineyard, in Sayalonga, above which they built their home.

Quickly recognising the enormous potential of the local Moscatel de Alejandría vines, they have had rave reviews from wine journalists and sommeliers.

It is little surprise you can find it in the world’s leading restaurants, including Celler de Can Roca, in Girona, and Gordon Ramsey’s restaurants in London. It also sells in Waitrose.

The Axarquía’s unique terroir of steep slopes and the closeness of the sea, all provide an ideal microclimate for the grapes.

The vines – some over 100 years old – are grown in hollows, to collect water, and are cut back to bushes, so that the leaves protect the maturing grapes from that scorching summer sun.

The wines produced are naturally sweet and unfortified and produced in temperature-controlled stainless steel tanks.

They named their aromatic wines Ariyanas, after a nearby Moorish hamlet, which comes from the Arabic word for aromatic.

The pair got their wine known by taking mini European tours to wine fairs and celebrated restaurants, getting an 85 per cent success rate. “If the sommelier tried our wine, the restaurant purchased it!” says Clara. 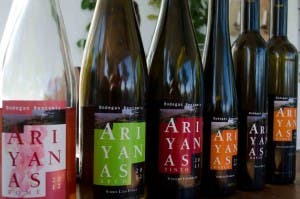 Why not come up for yourself, as Clara explains: “Visitors enjoy seeing the vineyard and get an understanding of how the wines are developed – before enjoying the wines with a guided tasting, alongside lunch.”