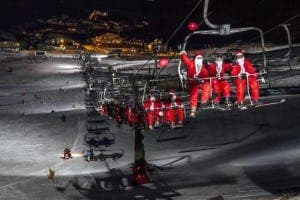 DOZENS of festive skiers dressed as Old St. Nick were spotted on the slopes over the Christmas period.

During the night skiing session, which runs every Saturday throughout the season, up to 30 Santas took to the slopes.

The CEO of Cetursa Sierra Nevada, María José López, said the event was a resounding success.

“The performance of Santa’s helpers was spectacular, a great way to start the program,” he said.

The mountain tops are still looking a little bare, with the harder red and black runs closed until the first major snowfall of the season.

For a live broadcast of the Sierra Nevada slopes visit www.sierranevada.es

James Warren - 17 May, 2021 @ 11:15
COMMUNITIES in Spain are confident that younger age groups are on track to receive the COVID-19 vaccine as early as July, says government figures....

Flight bookings to Spain’s Mallorca soar after Germans told they will NOT have to quarantine or take PCR test...