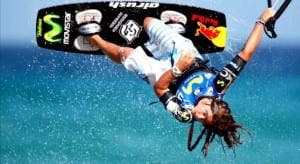 A RECORD-BREAKING kitesurfing champion has won her tenth world title.

Gisela Pulido, 21, was announced as freestyle champion by the Virgin Kitesurf World Championships after making the podium at all five events this season.

Tarifa-based Pulido, who entered the Guinness Book of Records as the sport’s youngest champion aged just 10, has been training with Spain’s national gymnastics coach.

“I have never been so physically fit as this season,” said Pulido.

“Gymnasts make jumps with their strength, they don’t have a kite to help them.It helped me to see how gymnasts prepare, their discipline and sacrifice.”

The win ended two years without a title for Pulido, who comes from Catalunya.

During the season, Pulido’s punishing training schedule included four hours of abs, legs and arm work in the morning followed by four more hours in the evening.

She often trains alongside Liam Whaley, who she considers and ‘brother’ and who won the men’s freestyle category for 2015.