LIONEL Messi has been awarded the Ballon d’Or for the best player in the world for a fifth time. 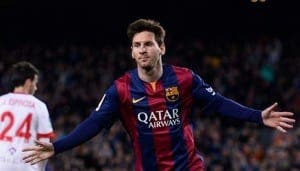 The Argentine saw off Portugal captain Cristiano Ronaldo and Brazilian Neymar with a landslide 41.33% of the vote last night.

He previously won the award four years in a row from 2009 to 2012, with Ronaldo reigning over the last two years.

Between the pair of them, they have won the last eight Ballon d’Ors.

Meanwhile, Ronaldo, 30, scored 57 goals in as many games.

“It’s a very special moment for me to be back here on this stage, winning again another Ballon d’Or after seeing Cristiano win it,” Messi said.

“It’s incredible that it’s my fifth, much more than anything I would have dreamed of as a kid.”