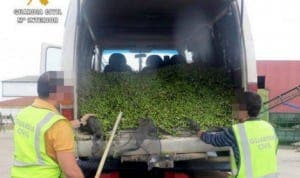 FARMERS are fighting back after a spate of olive and olive oil thefts.

The price of olive oil in Spain has surged by 50% this year, making it a steal on the black market. Now criminal gangs are plundering hundreds of tonnes of olives and thousands of litres of olive oil.

Smashing through gates and fences with large vans, criminal gangs swoop in at night and make away with numerous carloads of olives and oil.

But growers are not going down without a fight. Forming vigilante groups in Andalucia and Extremadura, the national farmers union says they will do all they can to defend their stock.

“Gangs are becoming more organised; where once they stole the odd sack of olives, now they are making off with exorbitant amounts from the trees themselves,” said Juan Metidieri, head of the Association of Young Farmers in Extremadura (ASAJA).

“Farmers are having to organise night patrols to protect their crops.”