The veteran BBC presenter, 53, moved to the upmarket Spanish resort with 28-year-old Jessica and their baby Edwin in May last year, as reported exclusively by the Olive Press.

It was a snap decision based on health, following a burst artery in his sinus due to stress.

But less than a year after moving into the luxurious five-bedroom villa, the couple have announced their separation.

A joint press release said: “It is with sadness that we announce we are separating. Our focus continues to be the happiness of our son Eddie.”

Jessica Moor, an aspiring author, told the Olive Press she felt like she could ‘finally breathe’ after last May’s move.

“It all happened so quickly – there were only two months between considering the move to unpacking our first box,” she said.

“Being out here means the time we will spend together as a family will be so much more special, and hopefully less pressured.”

After Edwin’s birth in September 2014, Nick – who already has three grown-up children – claimed the bay had added a ‘blissful new layer’ to his relationship with Jessica. 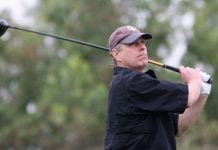