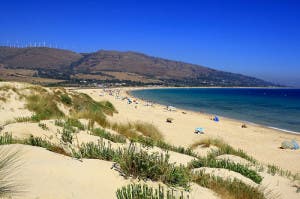 IT was one of the most barbaric and badly-planned developments of the last decade.

A scheme to build thousands of homes alongside a virgin beach in Tarifa has finally been outlawed for good.

In a massive victory for the environment, the town hall-supported Valdevaqueros project has been officially turned down by the European Commission.

A letter from Brussels’ environment chief to Verdemar-Ecologistas en Accion confirmed no development projects would be permitted for the pristine Costa de la Luz beach.

The Junta has already insisted that the development should be scrapped, with all ‘natural spaces’ on Andalucia’s coastline needing to be protected at all costs.

The definitive answer is a triumph for Verdemar, which has campaigned continually against the scheme for over four years.

The Olive Press also backed the campaign, even splashing on Tarifa’s mayor’s attacking ‘expat troublemakers’ who were behind sinking the project.

Spain named as one of the best countries in Europe to be a female health care worker – despite...

Kirsty Mckenzie - 6 Mar, 2021 @ 14:33
FOR women looking to embark on a demanding career in the health sector, making sure they earn a fair amount for all their hard...