ADDING to its treasure trove of sites, Jerez also boasts an archaeological museum. 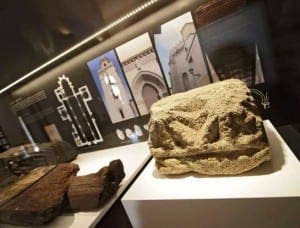 Within the confines of a 13th century palace, it holds some of the most perplexing artefacts that you will ever see.

Walking through the ages, you are steered on an incredible journey right back from when humans were apes hurling poop up to the modern day. Recently revamped, an enlightened explanation in both Spanish and English is available for every stage of the journey.

Toddling up to the entrance, you pass through what was once the busiest market area. Now sadly, hardly a trace of it remains. It houses just one cafe, and a few elderly shops.

Step into the museum however, and you are transported into one of the most up-to-date and best kept spaces in Jerez.

You enter into the old reception hall of the palace. A large white marble courtyard with a bubbling fountain in the centre. Your tour through history, the Jerez way, begins with an informative diagram of human evolution, complete with model skulls showing the different stages.

Taking into account its varied clientele, throughout its course the museum offers information and videos in both Spanish and English.

Nestled in-between the pagan statues, Islamic art and Roman remains you will find what I think is the most exciting artefact – real human skeletons.

Their authenticity is betrayed by their teeth, and the chirpy lady at the front desk. In a model, the effort of wearing down the teeth is rarely put in.

There are two skeletons still partially entombed in their coffins. An old one from the Roman period, and a slightly younger Visigoth one found with a Byzantine belt wrapped around its waist. Both of them have come from the local area.

Further on you can also see pictures of skeletons from under Plaza Arenal. Found buried facing Mecca, it was clear that they are from the Al-Andalus era, which today lends its name to the region Andalucia.

Sadly though, they had to be reburied at the request of the local Muslim community.

Voyaging onwards, you’ll come across relics from the Islamic and Christian era’s of Jerez. Historical loot from a city referred to as Saris, by the Al-Andalusi Caliphs.

Further still, the museum offers an explanation for the myriad of churches populating the city, Jerez’s plague years.

During this time, people turned to God in a big way. Disease alone is responsible for a large number of the churches seen today

You will certainly be captivated, entranced and enthralled by experiencing Jerez through the ages. I’ve been back four times already.

Set in the confines of an ancient palace, it certainly tickles even the most relaxed of minds.

Kicking things off! The surprising story of how one Brit brought football to Spain