IDENTIFYING Don Quixote and Penelope Cruz is an integral part of proving your ‘Spanishness’, an Israeli seeking Spanish citizenship has discovered.

The law means that if descendents of Jews expelled 500 years ago can prove their lineage and pass a language, history and culture test, they can be granted citizenship.

Ben Naim, from northern Morocco and Israel, grew up speaking Spanish at home. 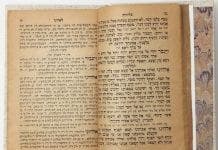