OWING  to Spain’s declining financial situation, budgets have been cut left, right and centre. Among those put to axe was the Auxiliares budget in Andalucía. This paid for a native English language speaker to come and teach English. 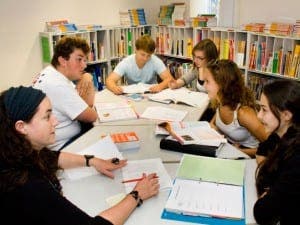 It has been cut in half, forcing schools to buddy-up in order to share one between them. This is typically done through alternating weeks; one week with one school, one week with another.

For Auxiliares, this is far from ideal. Many have found it very difficult to find a place within two different communities.

“Its a bit like being a member of two communities, and also a member of neither”, commented one Auxiliary.

Words like awkward, feeling bad and even excluded are used to describe the situation. A non-permanent community presence means that you miss out on events (and gossip) every week, making it hard to fit back into a group that has moved on without you.

One Auxiliary arrived for school on Peace Day to find everyone outside brandishing Spanish flags and chanting the national anthem.

Having been greeted by nationalism gone wild;

“One of the teachers came up to me and said, ‘you don’t need to be here.’ It was such a shock.”

It appeared that the absence last week meant that they had forgotten to tell their Auxiliary about the upcoming event. After this incident, their native English speaker felt that the atmosphere had changed.

“Now I feel like they can’t be bothered with me.”

A common comment was that the kids names remain a mystery. Teaching around 200 pupils is no easy feat, especially when they are all crammed into 12 hours a week. The majority tend to recognise classes just by faces alone.

A lack of connection in turn, means that it is difficult for the Auxiliary to establish whether they have had an impact at all.

“I am really concerned that they haven’t learnt anything from me”, mentioned one Auxiliary.

Teaching more pupils with less time means that learning for all students is hindered, this includes damaging pronunciation skills. A regular error being Ear-ope, instead of Europe.

Phrases that are continents apart.

In spite of this, there is general agreement within the Auxiliary community that this is the best of a bad situation. There is not enough of ‘da petty cash’ to get more native speakers into schools. Parents and staff alike recognise the invaluable nature of having a native speaker. They are essential to improving the kids pronunciation and knowledge of a foreign culture.

We can only hope that in the future, Andalucía will have more cash.