BORIS Johnson has announced he is backing the campaign to take Britain out of the EU.

The London mayor has chosen to defy Conservative Party leader David Cameron by backing a Brexit.

The referendum will be held on June 23, a vote which has huge implications for Spain’s British residents.

Johnson said: “I would like to see a new relationship based more on trade, on cooperation, with much less of this supranational element.

“So that is where I’m coming from and that is why I have decided, after a huge amount of heartache, because the last thing I wanted was to go against David Cameron or the government, I don’t think there is anything else I can do.”

In a blow to Cameron, Johnson follows cabinet member Michael Gove in the ‘Leave’ camp.

Briitsh expats who have lived in Spain for less than 15 years can register to vote on  www.gov.uk/register-to-vote.

Voting can be done by post, proxy, or in person if you are in the UK on polling day.

Those opting to vote by post will have ballot forms despatched around one month in advance. 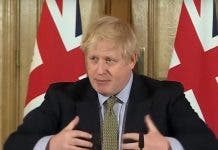 BREAKING: UK follows Spain and closes all pubs and restaurants in the fight against coronavirus