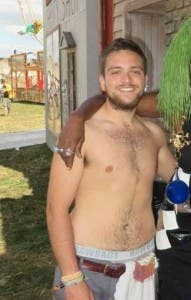 RELATIVES and friends of a Cornishman held in Algeciras for drug-related crimes are crowdfunding for a television to occupy him in jail.

Falmouth man John ‘Jomby’ Badger, in his early 20s, was arrested in September with two other men in connection with drug offences and has been charged.

The Brit could face 12 years in jail if he is found guilty.

Badger’s family launched a petition claiming his innocence after his arrest but it has now been replaced by a funding page to raise money for a TV for him in prison.

“We are trying to raise the €315 that he needs to buy a TV from the shop in prison. He is bored and can’t afford it,” wrote petition organiser Mike Smith.

So far donations stand at €333 and it is unclear whether the TV has been purchased yet.

Badger previously posted on Facebook that he met a man in a Falmouth pub before ‘agreeing to go to Spain with him on a boat’.

A Foreign Office spokesman has revealed it is continuing to ‘provide support’ to the British national.