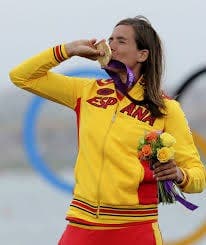 A SPANISH Olympian has thrown this summer’s Rio Olympics into doubt.

After coming down with a fever, Alabau who claimed gold at the London 2012 games, was diagnosed with Zika back in Spain.

Brazil is at the centre of the Zika epidemic and the Olympic committee fears athletes may be deterred from competing.

However, Brazilian President Dilma Rousseff and sports authorities insist the games will go ahead and are preparing for hundreds of thousands of visitors in August.

Despite contracting the disease, Alabau says she will still compete in Rio.

There are now a total of 32 confirmed Zika cases in Spain, three of which are pregnant.

Of those diagnosed, 10 cases are in Madrid, nine in Catalunya and one in Andalucia.

Many scientists and doctors believe that the mosquito-borne disease is linked to a rare birth defect called microcephaly, or abnormally small heads in infants.