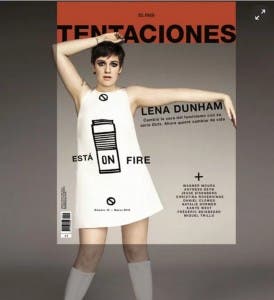 THE creator of HBO series Girls, Lena Dunham, has been left red-faced after a Photoshop tirade against El Pais proved unfounded.

Staunch feminist Dunham made headlines last week when she criticised El Pais magazine, Tentaciones, for what she described as ‘mad Photoshop’ retouching on a photo of her which appeared on the cover.

However, she was left eating her words after El Pais published an open letter showing Dunham’s PR-approved image had not been changed.

“Thank you for being so good-natured about my request for accuracy. But it’s a weird feeling to see a photo and not know if it’s your own body anymore,” she replied in a statement.