MADEIRA and its levada footpaths had been on my walking radar for years.

So when friends told me of plans to sell their family home in Funchal, and that it was ‘now or never’, were I to visit them, I jumped at the chance.

‘Bring a jacket for dinner’, they advised. ‘Life’s still a little old-fashioned out here’.

A few weeks later I was peering out across a glittering Atlantic towards towering black cliffs as my T.A.P. flight – Take Another Plane – suddenly seemed less of a joke as we dropped down towards a scary runway which, like Gibraltar’s, finishes in water at both ends.

The landing, like nearly every aspect of life on the island, was charged with a big splash of epic drama.

Madeira feels like it was never intended for human inhabitation, a place of savagely beautiful landscapes that tell a story of Man and his endeavour to tame the colossal forces of Nature.

The island pushes straight up from the Atlantic with some of the highest sea cliffs in the world, a truly cataclysmic volcanic invention. And, just back from the coast, gorges clad in dense laurisilva (ancient laurel forest, now designated as UNESCO World Heritage) stretch precipitously away towards the highest peaks of the island, reaching a staggering 1,850m in little more than 10kms.

The closest I’d come to such jaw-dropping scenery was on journeys into the Amazon basin through the cloud forest in Peru. Yet here, just an hour-and-a-half from Lisbon, was a place with just as much ‘Lost World’

Its mountainsides read like an O-level geology lesson with red and black layers of loose, post-eruptus tufa and scoria cut through by thin bands of silver-grey basalt.

The 15 kilometres between the airport and Funchal along the coastal highway, marked by a series of kilometre-long tunnels and high viaducts, take you where drivers were never supposed to go. Like nearly every other public works project, from the elegant dragon-tooth paving of the old town and the walled terraces that climb high up every hillside to the levadas (water channels) that bring H2O for miles around the bowl of every valley, it beggars belief that all of this could have ever been conceived, yet alone constructed.

Prince Henry the Navigator dispatched the first colonists to the island in the early years of the 15th century to claim it for the Portuguese crown, even though the island had appeared on maps since Roman times. They named it ‘Madeira’ – ‘wood’ – and set about clearing the dense, indigenous forest in order to plant wheat and sugarcane. Europe was mad for sugar which was dispatched from warehouses in Funchal in loaves clad in mahogany caskets.

By the middle of the century a flourishing merchant class was flouting its new-found riches, commissioning paintings, sculptures and altarpieces from the finest workshops in Europe. A visit to Funchal’s Museu de Arte Sacra, stashed full of works by some of the great masters from Flanders, paints a fascinating picture of Madeira’s entrée en scène on the world stage during Portugal’s Age of Discovery.

If the early settlers from Portugal established vineyards, it was the British who came to dominate the wine trade. Knowing that the best way to preserve wine for shipping was by fortification with brandy, they also discovered that heating the oak barrels improved both the depth and flavour of the precious liquid. Thus was born the island’s most famous export – that’s if you leave aside Cristiano Ronaldo – at a time when sweet Malmsey wines were de riguer at the best tables in Europe and America.

During my first week on the island my multilingual hosts, Paul and Donatienne de Chazal, showered me with kindness and hospitality, introducing me to their oldest friends and showed me round the gardens that have made Funchal one of the finest botanical destinations in the world. We sipped cocktails at Reids (Madeira’s take on Raffles, with Churchill and Hemingway numbering amongst its guests), listened to fado in the old town and feasted on the shockingly ugly yet surprisingly tasty scabbard fish.

On our final evening together at his family’s beautiful quinta, high above the harbour of Funchal, Paul disappeared to his cellar before pulling the cork on an 1860 vintage Madeira. The golden-amber liquid had a multi-layered intensity and depth of flavour the likes of which I’ve never experienced. I marvelled that when this wine was bottled, the motor car had yet to make its appearance and Britannia still ruled the waves, yet it was still improving with each passing year!

After a week of fine dining and fascinating encounters with families whose roots lay deep within the fabric of Madeira, I was ready to get to grips with the network of footpaths that have made the island one of Europe’s prime hiking destinations.

Walking on Madeira is synonymous with one word: levada or water channel. In Andalucían parlance, we’re talking acequia. These channels run for thousands of kilometres, arching round every valley on the island and bringing the water that falls as rain, and very occasionally as snow, down to the coastal settlements.

Beside each of the channels, a narrow path serves both as its lower bank and a route for access: the water conduits require frequent maintenance due to the damage caused by flash floods and rockfalls. Often hewn out of rockfaces on precipitous cliffs, with long sections of head-height tunnel and narrow bridges spanning 100 metre-high abysses, the levadas provide as dizzy a challenge as any seasoned walker could hope to find.

Whilst many of the levadas now have protective railing on their lower edge, there are long sections of path where you’ll have precipitous drops just centimetres from your boot. As well as a good sense of balance and a clear head for heights, you need to be happy negotiating the tunnels – head torches are essential – and to be showered by waterfalls dropping down from above.

Most levadas are best tackled as there-and-back trails although you can sometimes return to your point of departure by bus, whilst taxis wait at the start and end points of the more popular itineraries. Whilst nearly every levada is within 50kms of Funchal, bear in mind that you’ll average no more than 30kmph on the twisting roads of the interior where you need as much of a head for heights as you do on the footpaths themselves.

It was a couple of avid hikers from the UK, Pat and John Underwood, who first brought the existence of the levada paths to the notice of the walking community, with a feat of on-foot brilliance to match Kate Clow, who mapped out Turkey’s mesmerising Lycian Way. Today a staggering 50% of visitors to the island come to explore this network of paths, along with those that link the island’s highest peaks.

Walking guides and maps are widely available, the best being the Cicerone guide and Pat & John Underwood’s Discovery guide and map. If you prefer walking as part of a group, several UK-based companies offer guided  and self-guided walking on Madeira whilst local agencies on the island organise guided walks to suit all abilities.

Madeira is just a hop and a jump away from Andalucía.

It’s easy to understand why Madeira wine should have been chosen by Thomas Jefferson to toast Independence on July 4th 1776.

Americans prized the wine, which could tolerate the long, hot summers of the southern states while remaining in tip-top condition a year after opening.

The wines lived their ‘Golden Age’ in that century before mildew and phylloxera ravaged the Madeiran vineyards, as they did in mainland Europe.

Subsequent replanting has focused on the ‘noble grapes’ – that’s to say Sercial, Verdelho, Bual and Malvasia – and Madeira is back in fashion in the Benelux countries and emerging markets like Japan.

Shop around and you can still find vintage wines dating back to pre-Napoleonic times, allbeit with an eye-watering price tag.

Top walks: Caldeiro Verde and Caldeiro del Infierno close to Santana, the 25 waterfall circuit in  Rabiçal and the ridge-top walk between Pico do Arieiro and Pico Ruivo

Top tipple: Sundowners at Reid’s Hotel – it could be a chilled poncha, the local mix of rum, honey and lemon

Top hotel north coast: Quinta do Furão is a great base for exploring the northern levadas with soaring sea views and top notch cuisine www.quintadofurao.com

Top self-catering: Cottages in the grounds of the Zino quinta in a leafy suberb of Funchal fzino@netmadeira.com. See HomeAway property 420501 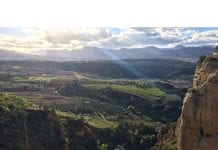 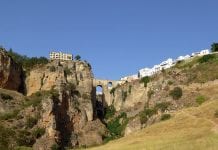 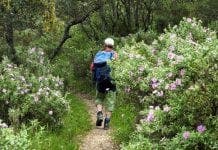 Excursions in the mountains of Ronda and Granada