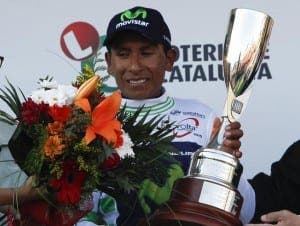 NAIRO Quintana has won the Volta a Catalunya after a gruelling final stage on Barcelona’s Montjuic.

The Colombian ace fended off attacks from Spanish riders Alberto Contador and Joaquim Rodriguez during eight circuits of the punchy 6km route to seal overall victory.

Last year’s Vuelta a Espana winner Fabio Aru attempted to seize control of the race from the Movistar rider, but his 30-second breakaway was pulled back in, as was an attack by Chris Froome.