ON June 23 this year, the United Kingdom will decide whether it would like to remain in the European Union. In the event of a ‘yes’ vote, don’t start flapping your arms like a mad chicken, the UK will not exit the EU overnight.

The best thing to do is not to panic. 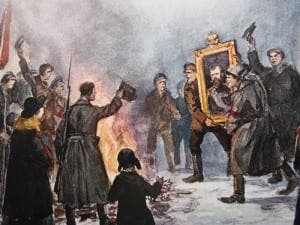 Scenes of expats clutching their valuables, staring in horror as their houses are torched by angry Spanish locals are, fortunately, quite far from reality. We aren’t in Tsarist Russia, after all.

Even if it is a ‘yes’ vote, sorting out a departure will be incredibly slow. It took Greenland over three years to depart after its electorate voted to exit the EU. That’s a bit of a slog considering all they had to renegotiate on was fish.

With it’s maze of EU links, the UK will undoubtedly take even longer.

Enter the EU. The organisation imposes a stringent deadline for countries once they’ve declared their intention to leave. Under Article 50 of the Lisbon Treaty, we have “two years after the notification” of withdrawal to hammer out all the new trade treaties. Luckily, it is possible to extend this but it must be a “unanimous” decision by all EU members. I don’t really see France giving us a chance, do you?

We have two years of normality following a HOORAY FOR BREXIT vote to decide what to do.

So let’s not panic, grab our children, and run for the first Easyjet flight to London.

In the event of a ‘yes’, everything we own and receive as expats will initially remain protected under EU law, and not under the Vienna Convention on The Law of Treaties, 1969. Many important papers have fallaciously lorded up this treaty as being our saving grace. Sadly, it isn’t.

Talking to Damian Chalmers, professor at the London School of Economics, I found out that the Treaty on Treaties is not as helpful as first thought.

“Basically this argument of acquired rights for expatriates [based on the Vienna Convention] has nothing going for it.”

It will defend property rights, patents and contracts but not a lot more. The much treasured pensions and free healthcare reaching Expats are defended by EU law only.

Thanks to the two year period, the taps connected to Spain from the Bank of England will remain on. It would be illegal for Spain to close them.

As the UK begins to hold seemingly endless trade negotiations we will begin to learn whether the Brexit gamble has paid off.

As bilateral agreements are made, their contents will be published before they come into effect. This will decide it for many. Whether they stay in Spain, or pack their bags and ship-off home.

So, contending with a Brexit is not as hard as it first appeared. We can have a ponder, toddle up and down the garden steps, cast our vote and then wait and see. Should the answer be ‘yes’ we will have two years to decide what we want to do.