ONCE the largest and most important European city, modern Córdoba stands as testament to its vivid history. Tucked in amongst the olive groves you will find one of the most interesting cities in Andalucia. The UNESCO acclaimed world heritage site holds the unmissable mezquita (Spanish for mosque), patchwork street plan and alcazar.

Located just two hours from Madrid or the Andalucian coast, it is easy to reach. The highlight is, of course, the mosque or ecclesiastically The Cathedral of Saint Mary (yawn).

The first few seconds in the mosque are spell-binding. You have stepped into a silent forest of columns. They stand in rows, in the characteristically linear style of Islamic art. The dense roof is occasionally broken through by shafts of sunlight, adding a peculiar Alice in Wonderland affect to the whole area.

This central part is called the hypostyle room, literally translating as the room filled with columns. 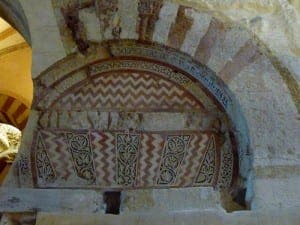 You’ll find the direction of Mecca at the mihrab, a niche in the wall facing islam’s holy city. All around exquisite carvings are laid atop a colourful arrangement of white stone and red brick.

The most treasured secret of the mosque is curiously next to the toilets. Tucked into a display case are three virtually unknown photos of the mosque whilst it was abandoned. Much like the Alhambra, for a period this magnificent structure too suffered from neglect, resulting in robbery and graffiti. These three tiny pictures today stand as a gesture to this ‘forgotten period’.

The mosque’s construction began in the 10th century under the orders of Abd al-Rahman. He wanted to build a holy structure to rival those of Baghdad, Mecca and Jerusalem.

Searching the city for a suitable site, his eyes fell on the visigothic basilica St. Vincent of Lerins. This building was initially shared between Muslim and Christian worshippers. The site was purchased and the basilica flattened. Then began work on the marvellous building that has survived to this day.

Approaching it from the puente romano (A Bridge that has existed since the Roman occupation), it looks like a fort. You can see the Catholic Churches additions sticking out above the ramparts. They quite literally built a cathedral in the middle of the mosque.

Entrance is obtained through doorways into the aptly named patio of oranges (you might even tread on an orange there).

Tickets are available from a kiosk in the patio;

No visit to the mosque is complete without also witnessing the additions made by crazy Christian Spain between the 10th and 16th centuries. They have bulldozed the centre in order to add a cathedral and hence “purify” the building.

The commissioner of the monstrosity, Charles V, is just as unhappy with it as you will be. Upon sighting the structure for the first time, he commented to the designer “you have destroyed something that was unique in the world.”

The Christian ‘cathedral’ bears all the echoes of Islamic-Christian artistic rivalry. You walk from the sublime grandeur of Islamic art into the gaudy overbearing character of the Catholic Church.

Muslims have tried to pray here recently, only to find themselves arrested. On a tour of 118 people, 6 Muslims decided to try and pray. They immediately found themselves encircled by security guards whom “invited them to continue their tour or leave the building”, according to the Guardian.

Catholicism still hasn’t quite given up its vigil over the Islamic relic.

There are other things in Córdoba but, honestly, none is more interesting to visit than the mosque. The fusion of Islamic and Christian art makes it an unequivocal symbol of Spain today. A melting pot of aged Islamic structures and walls, surrounded by gaudy churches that make this area one of the most visited by British tourists. Oh, and the sun of course.