THE headmaster of Gibraltar’s brand new independent school will be in Algeciras next week to meet interested parents.

Prior Park Gibraltar, opening in September this year, is offering an information evening with the headmaster to update parents on the school’s curriculum, school fees, teaching staff and site refurbishment. 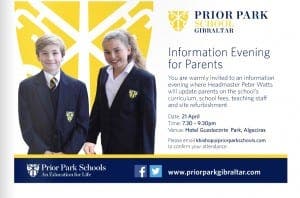 Attendants are politely requested to email kbishop@priorparkschools.com to confirm attendance.

The Olive Press met headmaster Peter Watts in February to learn more about the man behind the independent Catholic senior school, set to broaden the educational landscape of the Rock.

Peter Watts has already held the role of deputy headmaster of top UK school Sherborne and is turning his attention to a new career in Gibraltar with the full support of alumni, staff and governors.

The new school was announced last year and the Olive Press also reported the recruitment of headmaster Peter Watts in late June 2015.