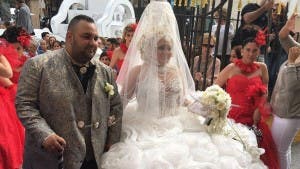 IT has been dubbed the ‘wedding of the century’.

No it is not the tying of the knot between Wills and Kate. Posh and Becks? Guess again. Even Katie Price’s ‘fairytale’ wedding to Peter Andre falls short in comparison.

It is, in fact, the gypsy wedding of Ana and Jose Luis in La Linea.

Both part of the large Romany gypsy family known as the Ramones, Ana was led in by one of her brothers as her parents both died a year ago. 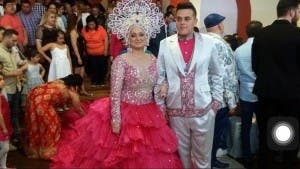 Sporting a 10 metre train, Ana’s bridesmaids, clad in bright red dresses followed her into the church.

Meanwhile, groom Jose Luis also wore white and jazzed up his outfit with a matching cane.

On the wedding invites, the couple had labeled the ceremony as ‘the biggest wedding of the century’.

The after party was just as impressive. With 32 tables, guests enjoyed kilos of seafood served up in old fishing boats. 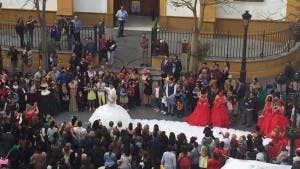 Eighteen hours of dancing then ensued with gypsy dance troop Farruquito and singers Sinai and Parrita leading the celebrations.

Over the course of the evening, the bride changed outfits five times.

KINGS OF HASHISH: Trial begins for Castaña clan, alleged to have made €30 million from drug trafficking in southern tip of Spain

What happens in Elche, stays in Elche: Vegas-style ‘weddings’ in shopping centre on Spain’s Costa Blanca