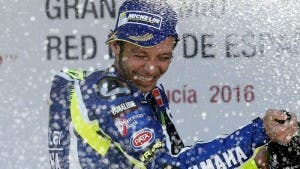 VALENTINO Rossi won the Spanish MotoGP at Jerez on Sunday.

The Italian was ahead of his rivals from the start, winning in 45 minutes and 28.834 seconds, well in front of Jorge Lorenzo and Marc Marquez.

It’s the seven-time MotoGP world champion’s ninth win at Jerez and his 87th victory in the top category.
“This was the perfect weekend,” said Rossi, “The race was fantastic. I had good pace and a good start and could push ahead.”
Defending champion Lorenzo said he had an issue with his tyres that prevented him from chasing Rossi.

Marquez maintained his top position in the overall standings, going up to 82 points. Lorenzo is second with 65 while Rossi is third with 58.

“After I almost crashed one, two, three times, I said 16 points for the championship was good,” Marquez said.