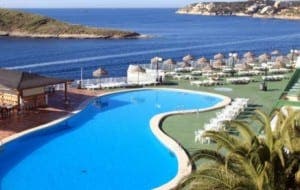 A BRITISH woman has been found drowned in the bath of her Mallorca hotel room.

The 24-year old holidaymaker was discovered last night by Magaluf hotel staff after she had spent the whole evening drinking.

Employees of the Torrenova hotel in Palmanova were alerted when guests realised water was seeping out from under her bedroom door.

It was confirmed this morning thanks to a post—mortem that drowning was the cause of death.

A Guardia Civil spokesperson said: “She had a lot of alcohol in her system and may have fallen asleep while taking a bath.”

A hotel receptionist revealed the woman had been on holiday with her partner but that they had had an argument before ‘he walked out on her’.

The source also confirmed the woman had asked the hotel to call the police ‘because her partner was being very aggressive’ before he called for a taxi to leave the hotel and take him to the airport on Sunday.

Her death was discovered on Monday night.